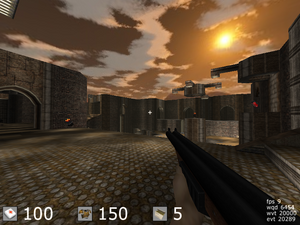 The map douze is one of the most known of the official maps of Cube.

Meaning of the name Edit

The meaning of the name can seem obvious for people who speak French: douze means twelve in French.

maps based on douze Edit

There are several maps based on douze. Two of them are the AC variant and the Sauerbraten variant. They both have the structure of the original, with twelve opened doors.

However, there are various maps with douze in their name but the presence of this term in their name is rarely justified by anything else than the fact they are based or supposed to be based on douze.

Retrieved from "https://acreloaded.fandom.com/wiki/Douze?oldid=4592"
Community content is available under CC-BY-SA unless otherwise noted.