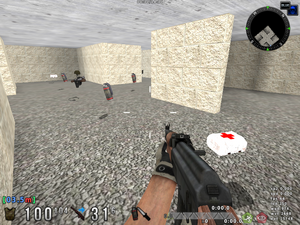 Made for ACR, acr_mini_arena is a little but map that isn't made for a specific game mode.

Several versions of this map were uploaded on servers. there is at least one version without map message. In others, this message say it's a minimalist arena.

Actually, only its size that is supposed to be minimalist. This map is have a lot of pickups, playerstarts and flags.

This map have four bases. Two of them are the RED and BLUE bases. The two others are for a three/four team gameplay (a such gameplay is impossible with the current ACR versions and isn't planned, even if it was suggested).

The zone between the bases have :

Retrieved from "https://acreloaded.fandom.com/wiki/Acr_mini_arena?oldid=4247"
Community content is available under CC-BY-SA unless otherwise noted.